During our time in Yogyakarta, we, like most visitors, wanted to take in the stunning and world-renowned Borobudur temple along with the nearby Hindu temple of Prambanan. We booked a very early morning tour via our accommodation at Agung Inn Hotel that included the sun rise over Borobudur, at Setumbu Hill, then a visit to the Borobudur itself and onto the temple of Prambanan. 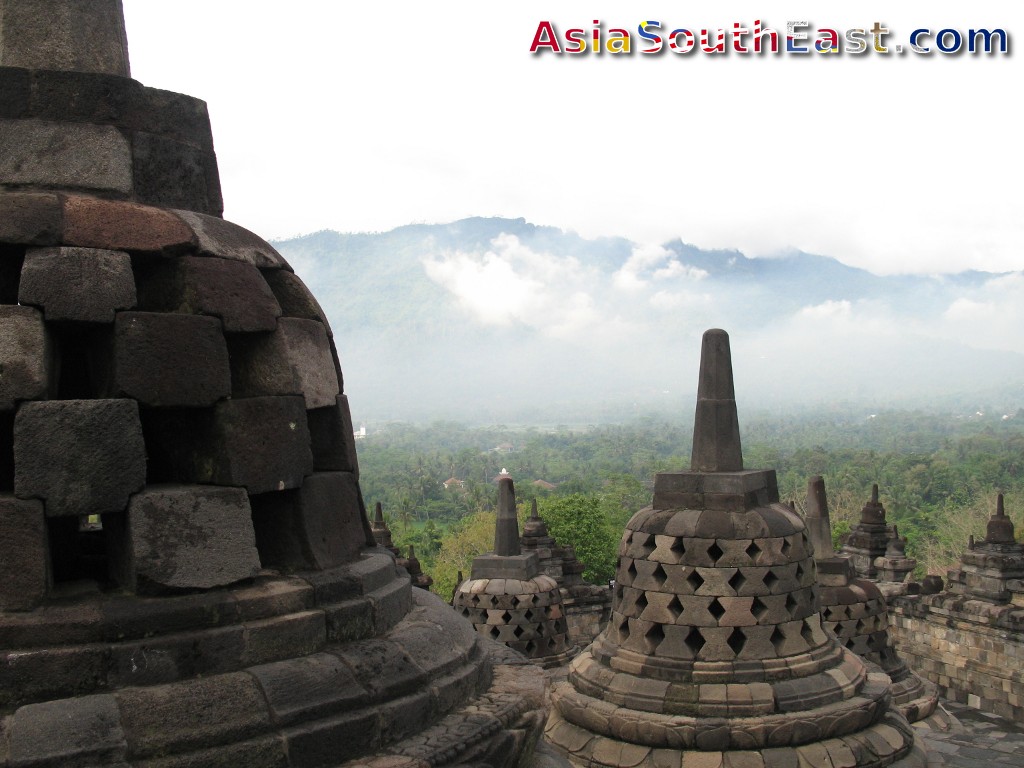 View from the top of Borobudur

We were picked up at 3.50am in a small mini van and made our way to Setumbu Hill. Arriving at around 4.50am, we were instructed to pay 15,000 IDR each to walk the 15 minutes up the hill. After a challenging upward journey to the viewpoint (in our flip-flops), via a very muddy and slippery path, we reached the top of Setumbu Hill. The view point was already quite busy with at least ten other people there for the sunrise along with a few locals selling tea, coffee and soft drinks. During the course of an hour, we watched the sunrise over the volcanoes, flooding the mist-filled valley with morning light. It was a special morning and a memory that will remain very special for the both of us. (We were also very glad that we had applied bug spray!)

After carefully making our way back down the now very muddy footpath, we boarded the mini van and made our way to the temple of Borobudur. Even though it was 7am, the temple complex was already filling up with visitors and hawkers. The entrance fee seemed a little steep at a cost of 180,000 IDR per person (cost for Indonesian residents is a mere 30,000 IDR) after already paying this much for the transportation from Yogyakarta. We were asked to don special sarongs before entering the complex, even though we had adhered to the online guide to appropriate clothing.

Headless Buddha sat on the Eastern face of Borobudur

Built during the 8th and 9th Centuries, Borobudur is one of the most spectacular Buddhist monuments in the world and is the most visited tourist site in Indonesia. Bodobudur was constructed during the reign of the Syailendra Dynasty, but was abandoned between the 10th-15th Century. The decline of Hindu kingdoms in Java, volcanic eruptions along with the conversion of the Javanese population to Islam are all suggested as the reasons behind the abandonment of the site.

One of over 2,500 relief panels at Borobudur

It was the famous Sir Thomas Stamford Raffles (the founder of Singapore) who, in 1814, ‘re-discovered’ the overgrown site with help from local Indonesians. Over the years many restoration and conservation projects have been undertaken to preserve this iconic temple (hindered by earthquakes and volcanic eruptions in Central Java). It was finally in 1991 that it rightfully gained a place on the prestigious UNESCO World Heritage List.

View of the Borobudur Temple / Stupa

The Borobudur Complex was built in three tiers, and is described by UNESCO as “a pyramidal base with five concentric square terraces, the trunk of a cone with three circular platforms and, at the top, a monumental stupa. The walls and balustrades are decorated with fine low reliefs, covering a total surface area of 2,500 m2. Around the circular platforms are 72 openwork stupas, each containing a statue of the Buddha”.

Buddha sat in an open stupa on Borobudur

Signs around the complex instruct the correct way to visit the temple, entering from the east, following each stairwell, walking clockwise around each level, then taking the next stairwell at the east entrance, this is known as ‘Pradaksina’. This is the route taken by thousands of Indonesian Buddhists once a year, who visit Borobudur to celebrate Vesak (at this time other visitors may not be allowed full access to the site, due to its religious significance).

At the allotted time we headed back to the agreed meeting point where we ate our meagre breakfast of toast and fruit along with a cup of tea and coffee. After half an hour or so, we headed to another bus, where we joined three other couples to visit Prambanan.

After around 1.5 hours, we arrived at Prambanan to be told we had to pay again to enter this particular complex. This time round, the cost to enter was 171,000 IDR per person(for Indonesian Residents; 30,000 IDR). After countless ‘rip-offs’, we surprisingly declined to enter.

I think it only right to put this into perspective. We had been stung pretty much everywhere in Indonesia, and felt like we had “walking ATM” tattooed on our foreheads. At every airport and train station we had heard every trick in the book just to be charged more money (even that the town had ‘moved’ and it would cost more). We had paid for a tour, then been charged to slip and slide up a muddy footpath to watch the sunrise on top of a hill (I am sure we wouldn’t have been charged to walk up the hill next to Setumbu.) Our driver, told us that we had to pay another 40,000 IDR for breakfast (we had already pre-paid 10,000 extra for breakfast to be included). We had checked online what items of clothing would be suitable for the Setumbu hill walk and the Borobudur complex, opting for flip-flops rather than our walking boots (which would have been far more suitable) and long trousers and long tops for the temples, only to find we could have worn what we wanted as did most other visitors. Not to mention the unbelievable amount of hawkers that surround the Borobudur complex, some of which even grabbed me whilst trying to sell me one thing or another. Then there were the groups of local teenagers who giggled and commented about every foreign female that passed by (when they were not attempting to carve their names into the monument itself). We found the whole experience in Indonesia and particularly in Borobudur to be a cynical exercise in extracting as much money as possible from tourists, without a thought to their enjoyment or the prospect of them returning to the country. We were totally disappointed and a little frustrated too, this was what we had expected in Thailand, but not in Indonesia.

In comparison, we visited stunning temples in Vietnam, such as the Cham Towers (Po Nagar) in Nha Trang or the Marble Mountains between Da Nang and Hoi An, for a fraction of the price and in a much calmer atmosphere with no hawkers inside the temple complexes.

The North and Northwest Towers at Po Nagar

We will probably never return to Java, most of this down to our experiences of being ripped off. The Borobudur complex is a wonderful site to visit and a must for anyone travelling in or through Indonesia, just be aware of the cost and constant hassle.

Our best part of the tour for us was the stunning sunrise on Setumbu Hill. This is a must, even if you have to get up at 3.30am…..

Booked with Agung Tourist Service
Time : Pick up at 4am
Length: 9 hours
Cost: 160,000 per person including breakfast

Excluded from the tour cost;

A Handy Tip for Prambanan:
The stunning Ramayana Ballet takes place at the temple of Prambanan. This is an alternative way to see the temple, whilst also watching a Javanese dance production at night. (Killing two birds with one stone so to speak.)
Cost between 100,000 – 350,000 IDR per ticket
Show time 19.30 – 21.30.