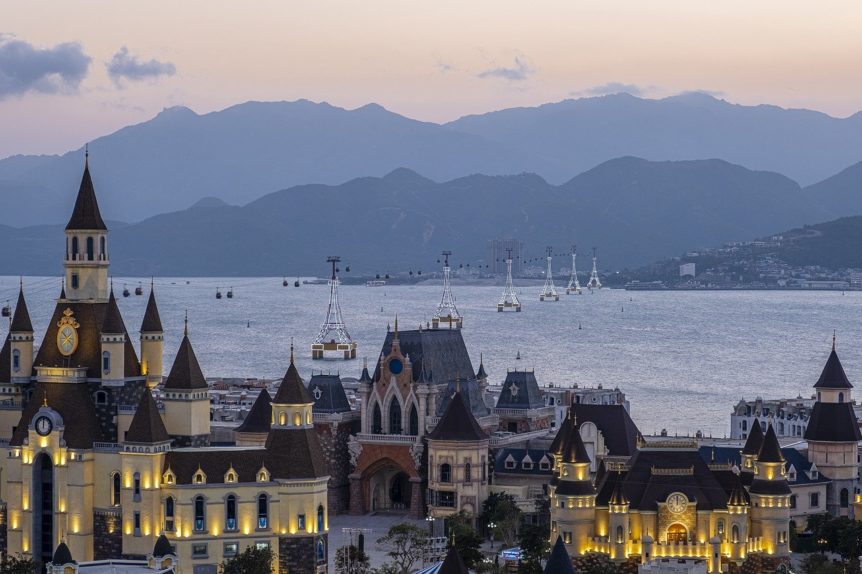 Visitors to Nha Trang cannot help but notice the Hollywood-style Vinpearl sign on the hillside of neighbouring Hon Tre Island. The Vinpearl resort is a huge development that includes luxury accommodation, a golf course and a 200,000m² amusement park with outdoor ‘rides’, indoor games, a water park, shopping mall, aquarium, food village and more. The island is accessible by private yacht, speedboat or, more conveniently, by the 3.3km Cable Car that connects the resort to the mainland – the longest oversea cable car in the world.

My partner and I decided we wanted a day of R&R and headed out to Vinpearl Land Amusement Park. After being dropped off by a Mai Linh taxi cab , we bought our tickets for the cable car and headed over to the station.

The cable car ride lasts around 12 minutes and is pretty spectacular, with stunning views back to Nha Trang and across the bay. Upon arrival in the Main Square, you find yourself in the centre of the Outdoor Games area, which includes a small roller coaster, merry-go-round and other ‘fairground’ style rides. The spinning swings were good fun and actually quite fast, although our favourite by far was the Alpine Roller Coaster. The Alpine Coaster is more of a semi-controlled descent than a coaster, where either one or two people per cart are taken to the top mountain station (540m vertical assent) and then using a hand braking system, can control their way back down to the lower station. It is a 1,760m run, offering great views over the Nha Trang bay and, unusually, gives the rider some control (within safety limits). We found this to be the busiest ride in the whole park (including any at the water park).

The ascent on The Alpine Coaster at Vinpearl

The indoor arcade game area pleasantly surprised us. Coming from the UK, I have been to Alton Towers many times and don’t remember the games ever being free. All of Vinpearl’s games were free, from racing and fighting games, to dodgems and basketball games, even a small 4D Cinema: 3D glasses and a moving platform – somewhere between a cinema and a simulator. We purchased a large tub of sweet popcorn for the cinema at 20,000VND – an absolute steal.

The Swing Carousel at Vinpearl Land (sit on the outside)

As midday approached, along with the heat, we decided to make our way to the Water Park to cool down. After changing into swimwear and paying to drop our bags in a locker, we headed out to explore the 60,000m² park. The choice of rides was very good and none seemed too busy – our longest queue was 10 minutes and most rides had no queue at all. With body, mat and ring slides, there was plenty on offer to suit everyone. A central pool area contained a shallow children’s play area with mini slides and a large adult pool complete with wave machine (on the hour) along with numerous sun loungers. A ‘Lazy River’ surrounded the water park area, where you grab the nearest free single or double ring and float along with the flow of water. We thoroughly enjoyed the water park, especially the slides using the double rubber rings and the wave machine in the central pool. The ‘space slide’ did, however, hurt both of our backs, but was great fun once you entered the bowl and dropped down into the large ‘tub’ of water below.

Alongside the water park was a small section of sandy beach, where guests could laze under an umbrella on a subbed, or cool off in the sea with views of Nha Trang City in the distance. Not too much to see with a snorkel and mask, but a nice way to relax after visiting the theme parks.

Once the water park had closed, we headed to the “Underwater World” aquarium, which was surprisingly good, with a moving walkway taking visitors through the aquarium’s shark tunnel. We saw clown fish, turtles, rays, small sharks, moray eels, sea horses and more – a very enjoyable addition to our visit to Vinpearl Land.

As we were heading back towards the Cable Car station, we stumbled upon a laser, light and water show. A large amphitheatre was centred around a water stage where lights, sound, flames, lasers and powerful water-jets were utilised to create an impressive display. We had both seen these style of shows before and didn’t stay for too long, but nevertheless, it was a nice end to our day at the park.

If you choose to stay until later in the evening, bear in mind that the queue for the cable car can be over an hour long. We decided to stop at one of the fast food areas for a snack and drink while the crowd died down.

For all of the negative press that Vinpearl receives, we thoroughly enjoyed our day out. It is a theme park and as such is often dismissed by snobby backpackers, but it is very good value for money and great fun – just don’t expect Disney World quality. We went on rides, played in a water park, challenged each other at the indoor games area, watched a 4D movie (well 10 minutes), visited an aquarium, saw a water-show and relaxed on a picture-perfect beach. For small and big kids alike, Vinpearl is a great day out, and set in the heart of stunning Nha Trang Bay you won’t find an amusement park with better views anywere.

Just as a reference point:

Do note that opening hours for the various sections of the park vary. Opening hours are posted on information boards around the park. Or just ask the staff, they are very helpful.

Cost:
450,000 VND Per Person
Including entrance to Vinpearl Land (All rides in the Water park and Theme Park, Aquarium, Water Show and Cable car to and from Hon Tre.)