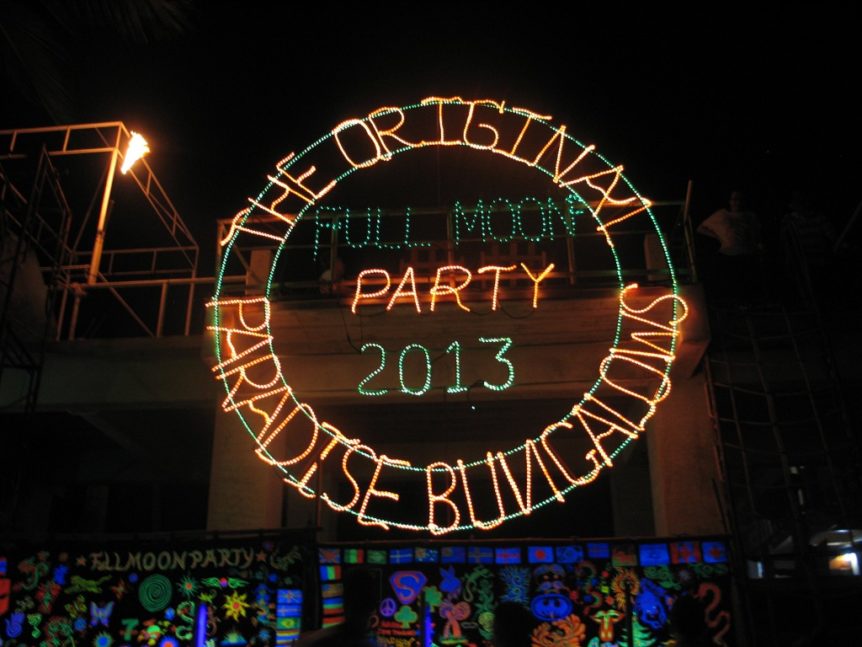 The Full Moon Party in Koh Phangan is the most infamous beach party in the world. Drawing an extremely international crowd, the Full Moon Party takes over the small town of Haad Rin, on the South East coast of the island once a month.

Its hard to say when the first Full Moon Party occurred, most sources indicate somewhere between 1985 and 1989, when a small number of travellers organised a birthday party on the beach. Nowadays, between 7,000 and 30,000 make this monthly pilgrimage to South East Asia’s party paradise. With a reputation as the most uninhibited party on the planet, our expectations were running high. 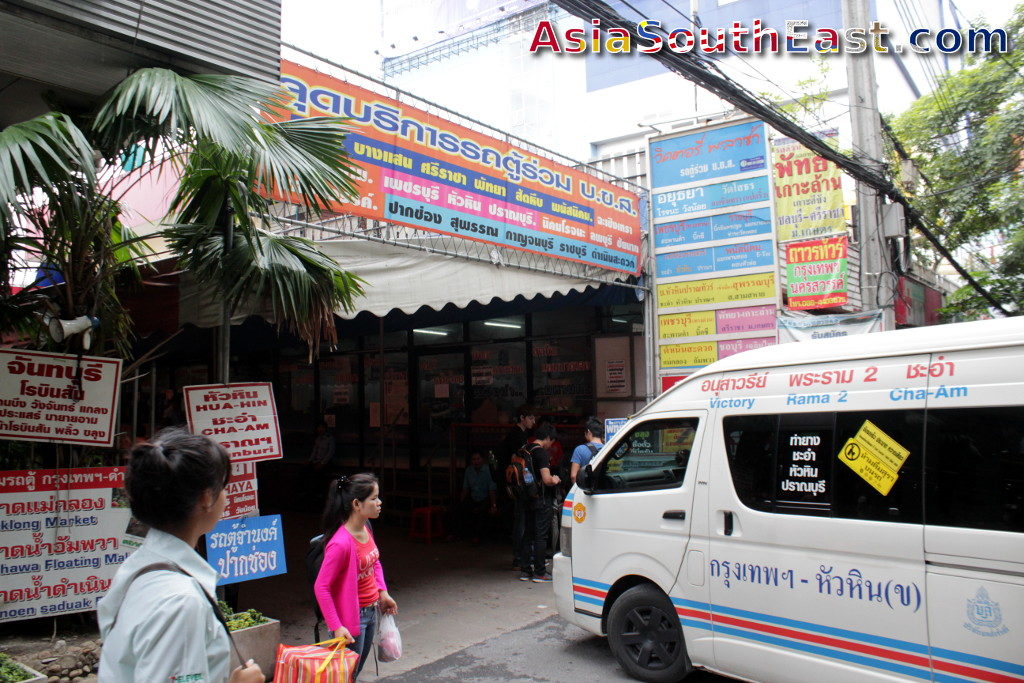 “The calm before the storm” on Koh Samui

We stayed in Bangrak, Koh Samui during the Full Moon Party and simply hopped on a boat to Haad Rin at 6.30pm. Boats from the Petcharat Marina and Big Buddha Piers leave hourly with prices varying according to your choice of transport. A larger ferry boat takes around 45 minutes and we paid 200 baht each one-way (the last Ferry leaves at 6.30pm). A speedboat takes 20 minutes and can cost from 500 baht upwards! As always in Thailand, it pays to research a little. Boats back to Samui can be expensive but we paid just 500 baht per person for a speedboat with around 13 other people. A gentleman one pier down quoted us 1,500 baht each!

As instructed we arrived at the Petcharat Pier at 6pm, along with other party-goers and a few passengers ‘in transit’ to Koh Phangan. The passengers were surprisingly quiet, “the calm before the storm”.

Upon arrival in Haad Rin, an entry fee of 100 baht is charged, this does include a rubber keepsake wristband. Once past the security teams that check for your wristband, we were bombarded with stands selling day-glow/UV items from clothes to flashing horns. 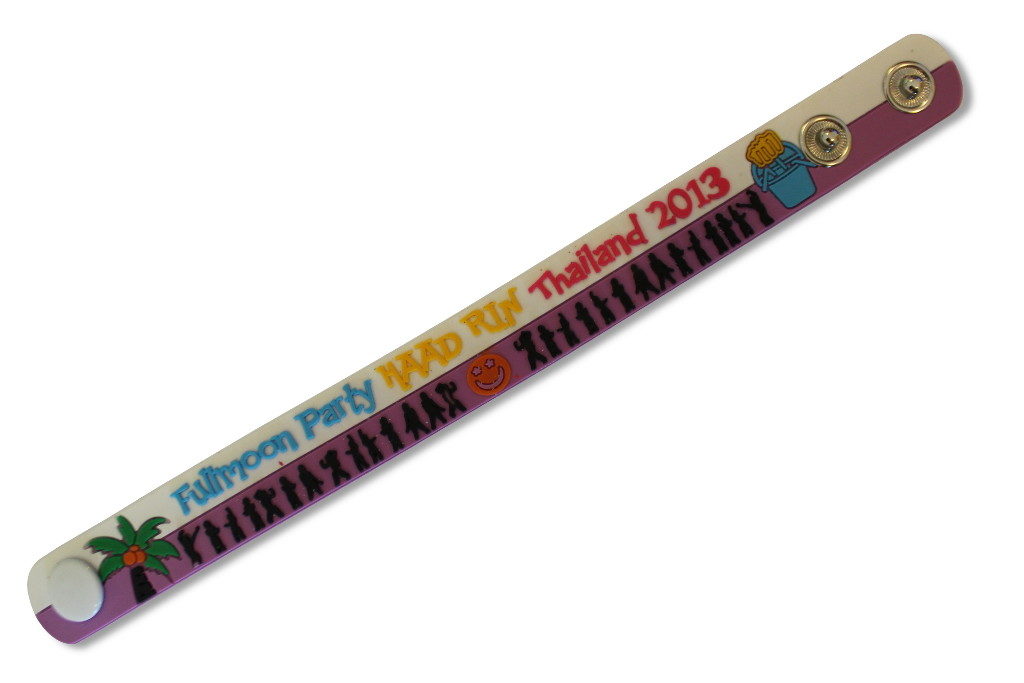 At the Full Moon Party, the drink de rigueur is a bucket filled with a high octane cocktail of spirit, mixer and energy drink – yes, that’s a bucket as in a plastic beach bucket and spade. 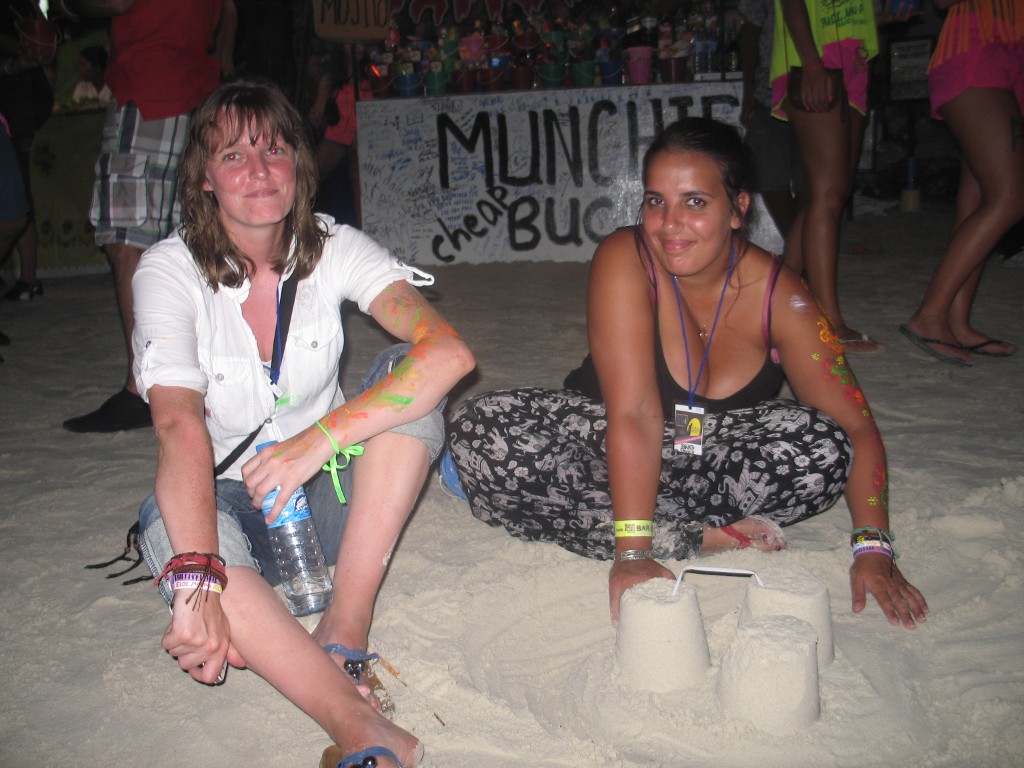 The buckets vary in price according to the ingredients. The usual rate is 150-250 baht for a bucket with a local spirit such as Sangsom through to 450 baht plus for one with Absolut Vodka. In bars most drinks tend to cost more, hence the bucket’s popularity. A word of caution: Thai-style Red Bull is a potent tonic – very different to the fizzy energy drink known around the world! 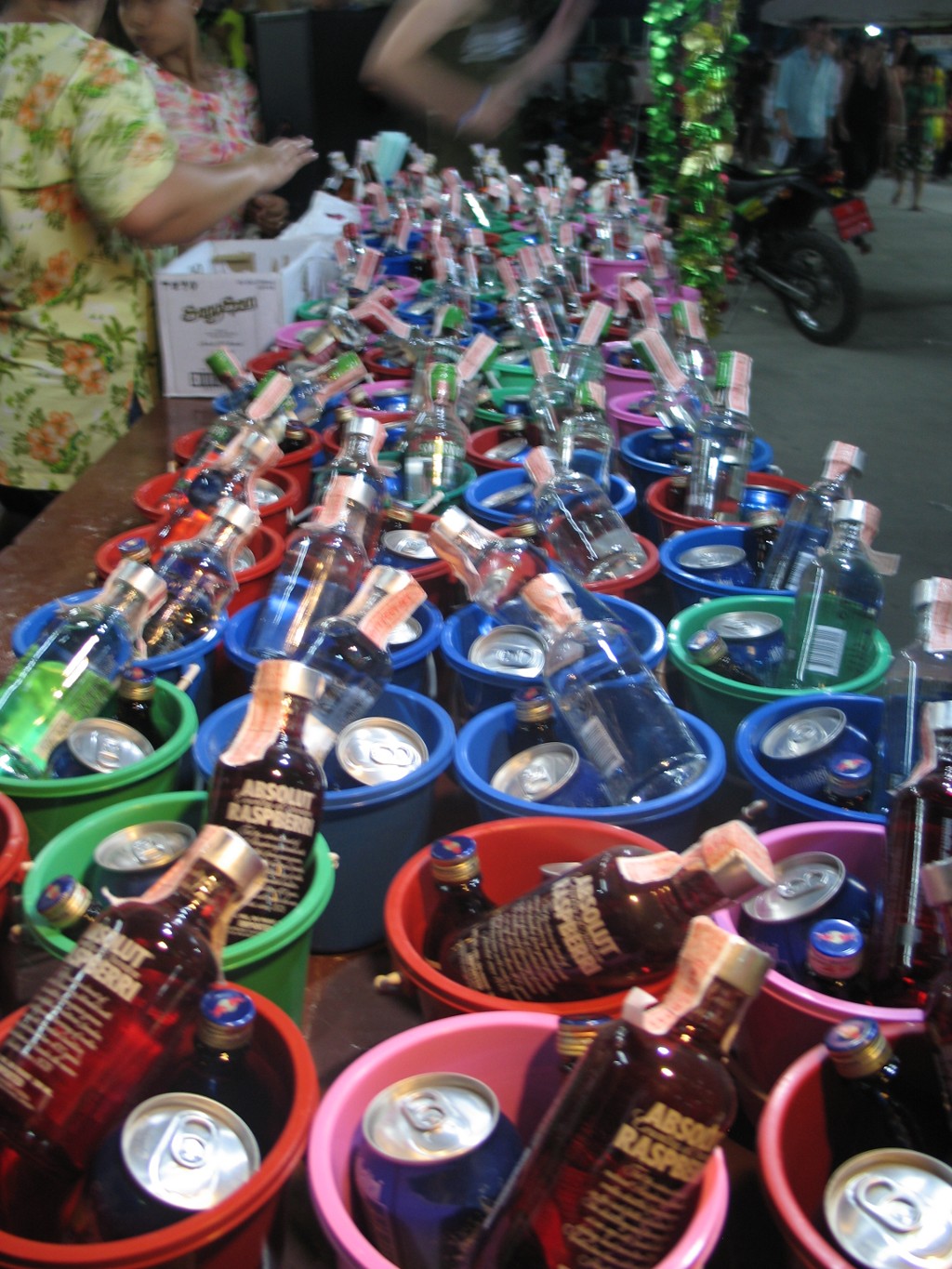 Whilst wandering around the streets of Haad Rin we saw numerous jewellery shops, tattoo parlours and of course the obligatory Irish bars. Restaurants offer full sit down meals while stands sell the usual street food such as spring rolls, corn on the cob, phad thai, grilled chicken and pizza. It is always best to book accommodation, especially in Haad Rin, well before the Full Moon Party. Tourist agencies and other shops do offer accommodation on the night, however this is usually at a hugely inflated price. 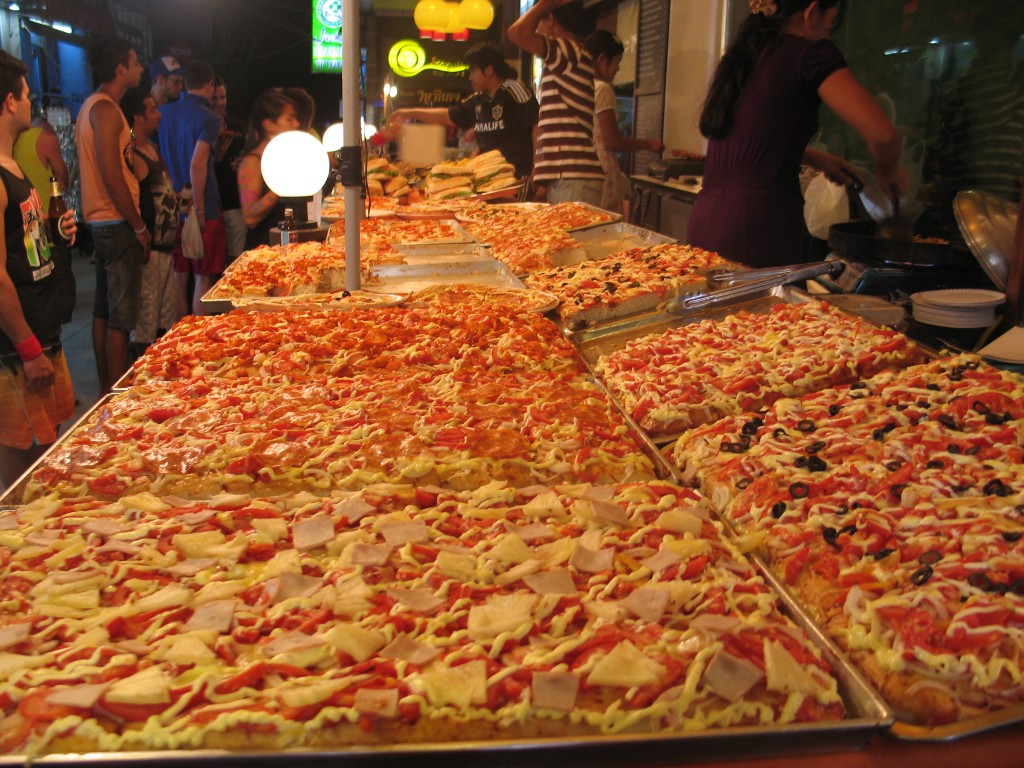 One slice or two? 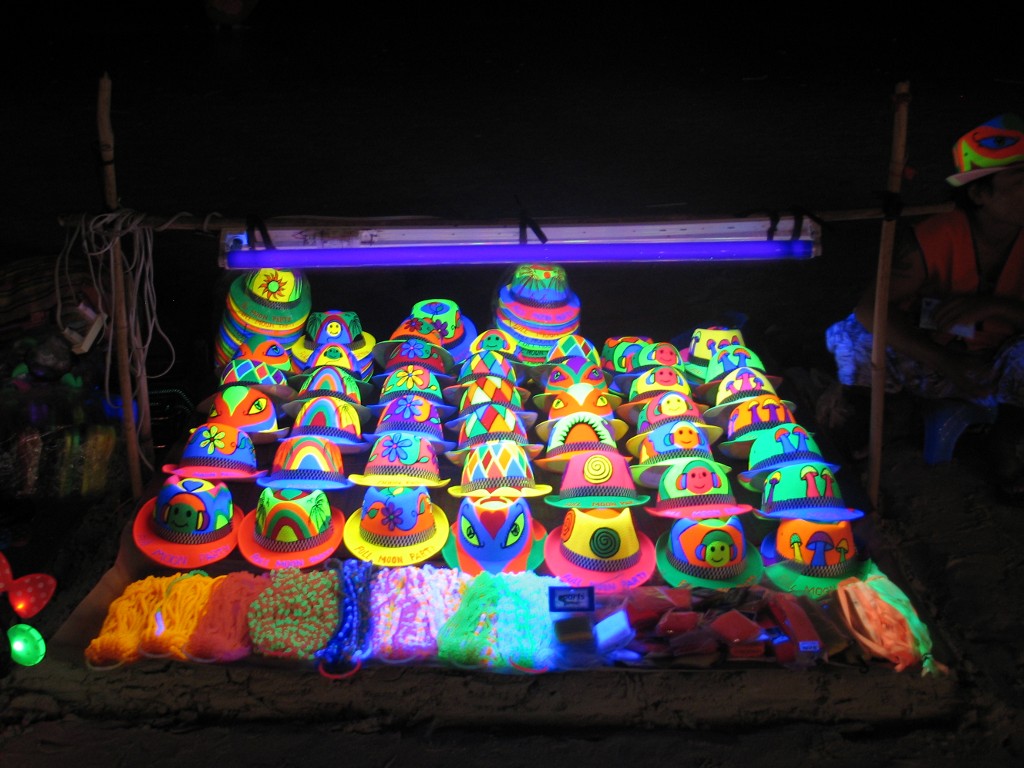 A selection of day-glow party hats

Street artists set to work covering bodies in chosen day-glo paint designs for a few hundred baht. It seemed like most people had some artwork on their bodies whilst others were completely coated in it. (Most guest houses and resorts will charge you for stained sheets. Wash off day-glo paint upon your return.) 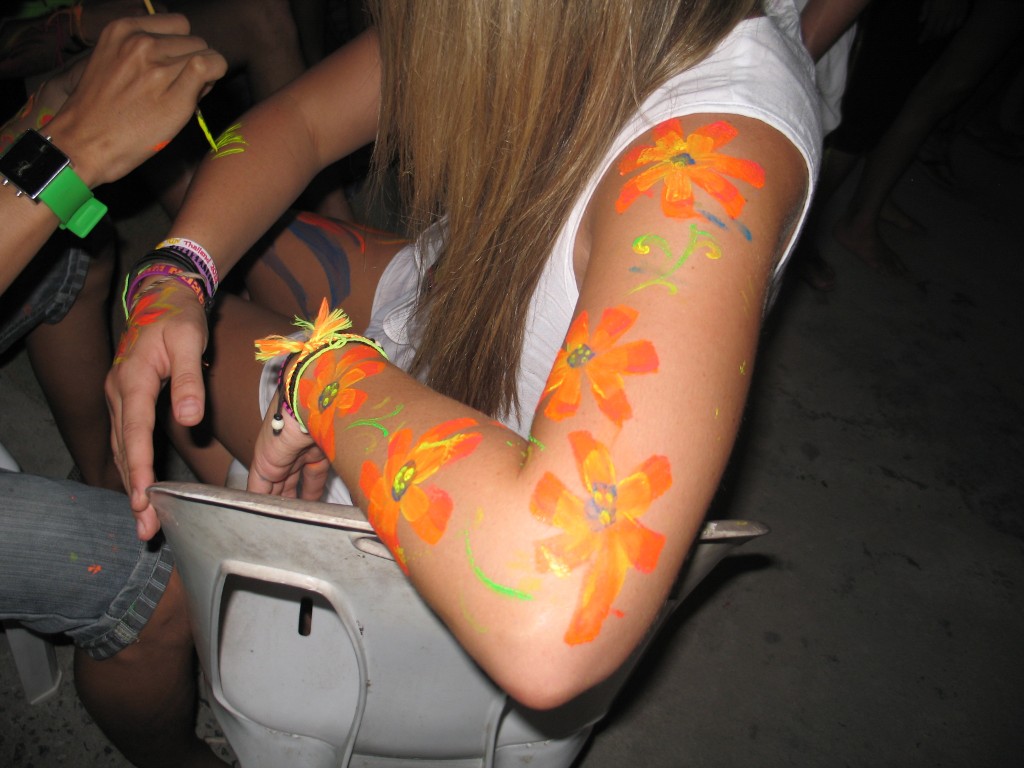 A young Aussie adding to her glow paint collection

Weaving through the narrow streets, we followed the crowds and headed towards the music. It was only 7.30pm and already the party was in full swing. As we passed Cactus Bar and made our way onto the beach, everyone was having a great time – dancing, drinking, eating and swimming!

We wandered up and down the beach, taking videos and photos – most people were happy to be photographed and continued partying with no inhibitions. After working up a thirst we headed to the south end of the beach to a bar called The Rock, yep you guessed it, set up on a rock overlooking the Full Moon Party beach scene. Knowing there was a long night ahead, we ordered a soda and cup of Tea, feeling like the only sober party-goers. After an hour of watching the party develop from our vantage point, we headed down off The Rock and into the multitude of dancers. 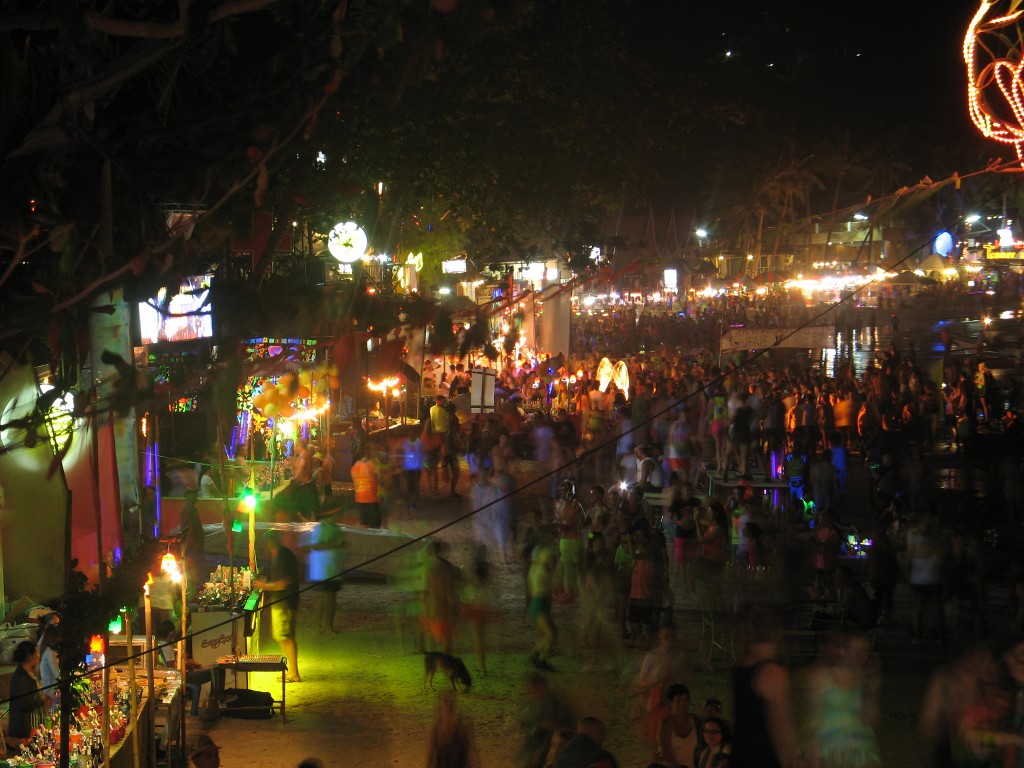 View from The Rock

Apart from the many DJs pumping out commercial house music, there was also plenty of alternative entertainment on offer. From water slides, to group skipping ropes, laughing gas bars, chill out reggae areas to Mellow Mountain. Based at the northern most point of the beach, offering a chill out balcony complete with cushions, rugs and an elevated view of Sunrise beach, Mellow Mountain provided the ‘chill’ in contrast to the beach’s ‘party’. I must admit, there was a rather strong smell of Marijuana on Mellow Mountain’s balcony – but most people were simply taking a break from the heavier trance and dance areas, or having a chat with friends. 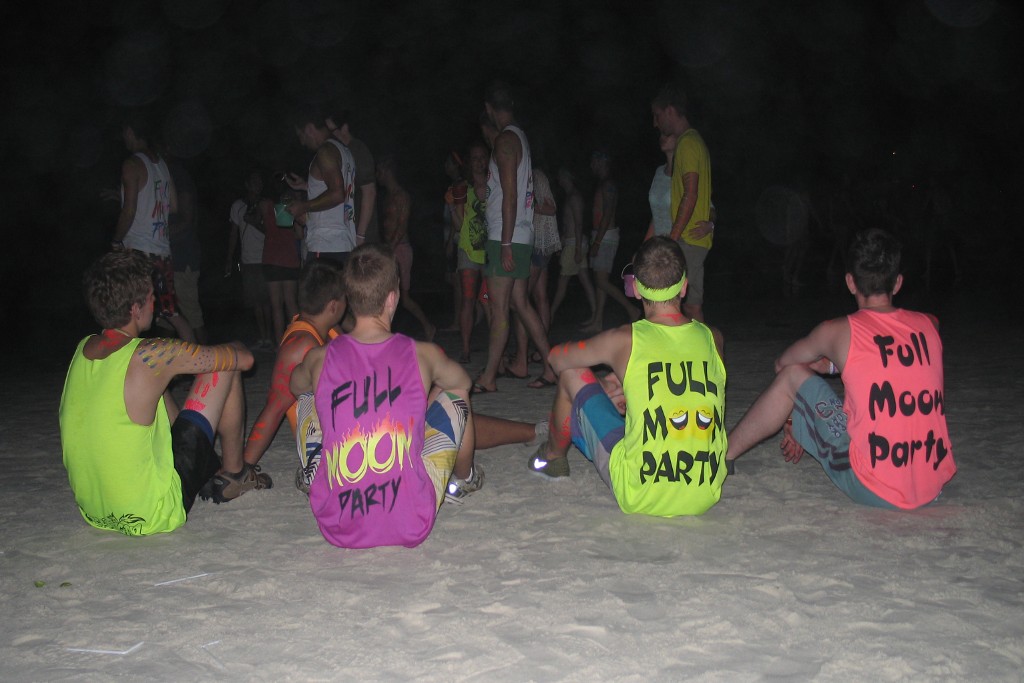 As you’d expect with such a large party, you eye is drawn to so many different things all at once. Thai locals have come up with some extraordinary ways in which to accomplish this, as is shown in the pictures below. We couldn’t help but laugh 🙂 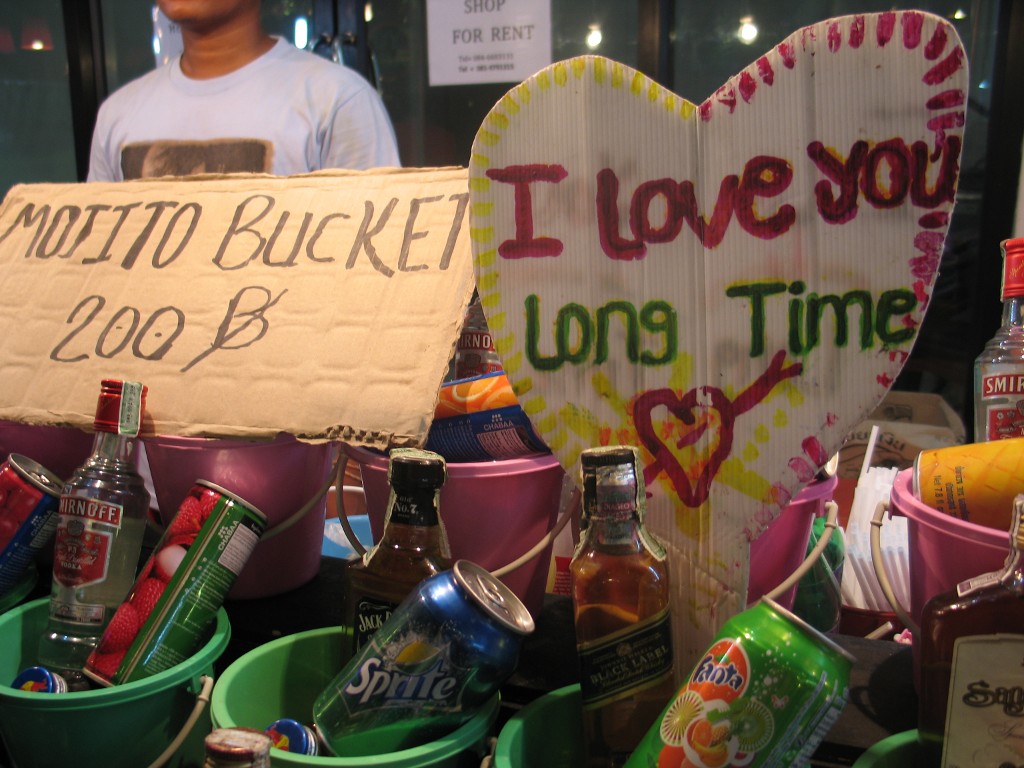 ….or short time if you want. 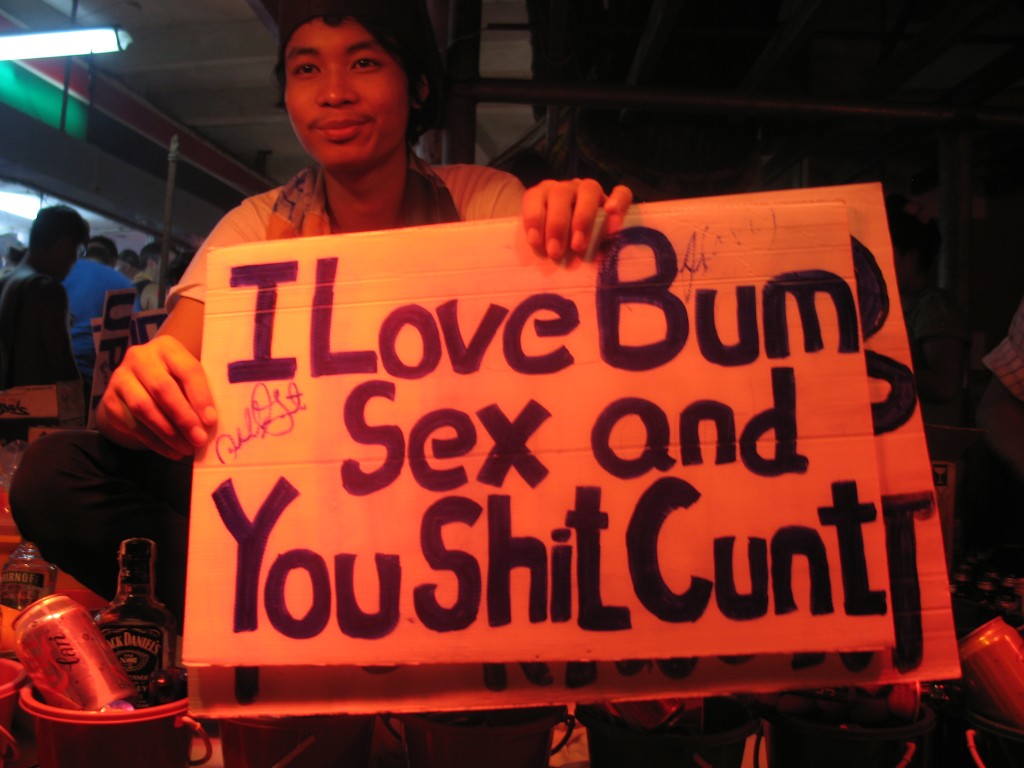 As the evening progressed, the crowds around each DJ and Bar area grew denser. It made it harder to move around as revellers decided to party where they were stood, rather than to move on. After ‘fighting’ our way through the crowd, we found the Reggae beach bar and decided to stop for a breather.

During our ‘down-time’, we met various poi and staff players. A young lady and I began chatting and swapped LED glow poi for a while. Shortly after a young man joined us with a large and heavy fire staff. Between the spinners, a circle of spectators gathered. 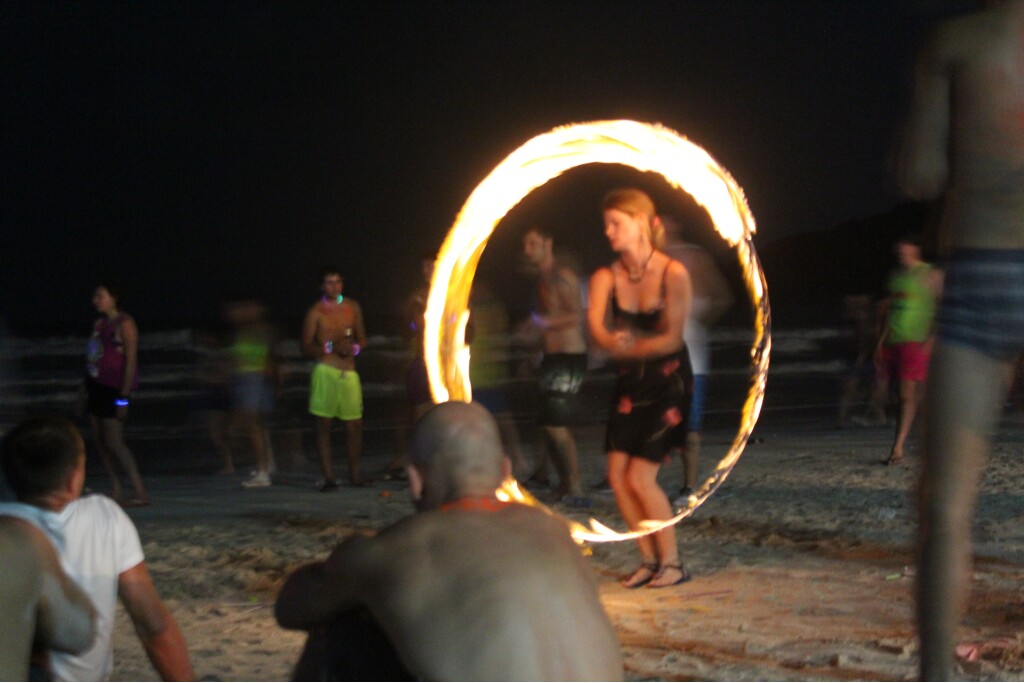 As people dropped in and out, we began teaching newbies and swapping tips with fellow spinners. One guy was able to find some fuel to burn, however he was charged a ridiculous price for a tiny amount of fuel, it lasted for just a 5 minute burn. Nevertheless, it created a little buzz around the Reggae bar, a fun but interesting side-line from the main partying activities. Once again proving that playing with Poi and Staff means you get to meet so many different people. A great way to socialise and keep fit! 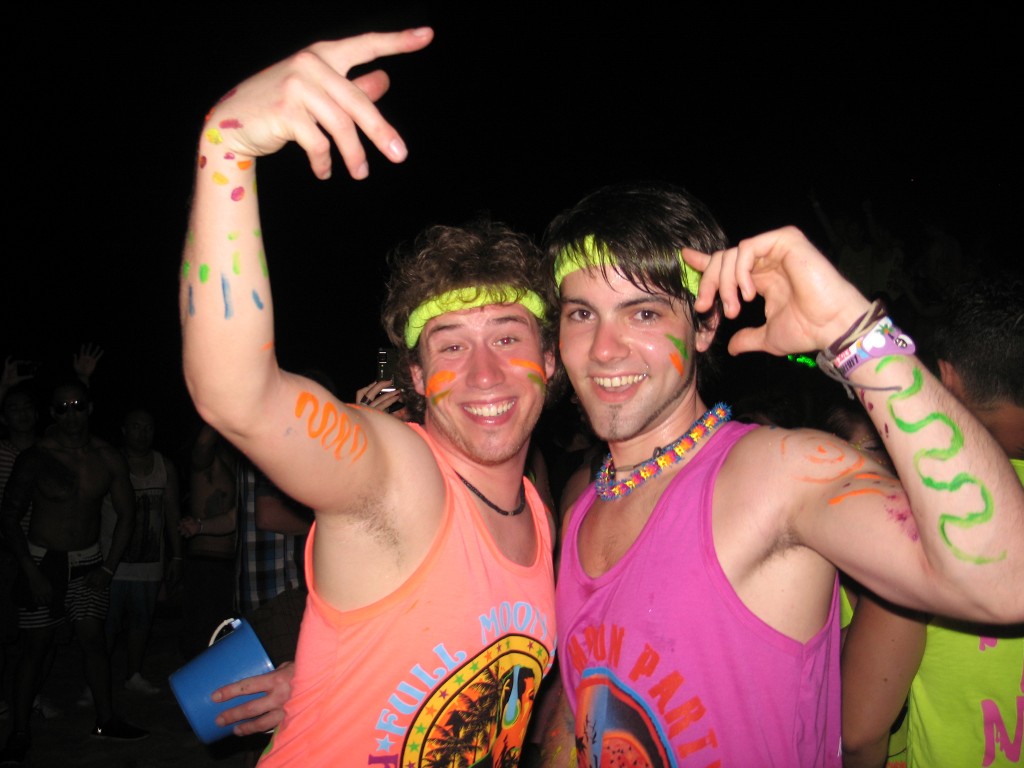 Its all about having fun

A recent article by that bastion of accurate and impartial reporting, the UK’s ‘The Sun’ newspaper, absolutely slated the Full Moon Party. If this was anything to go by, I expected every Thai local to offer me drugs (with a Police Officer close by to extort me further) and to see women urinating left, right and centre. During our 9 hours of sobriety at the Full Moon Party we were offered MDMA once and politely declined. Nothing more, nothing less. As mentioned before, there was the distinct smell of Marijuana in certain areas, that was all. Neither did I see any women urinating in public – it made more sense to pay the 10-20 baht fee to use a WC. The Full Moon Party is just that, a Party, and a big one at that. It did not appear in any way a “violent and dirty place” as some reviews may have you believe. But do not be disillusioned with ideas of a ‘hippy-style’ party with guitars, joints and free love (although many of those who consumed a few too many buckets may have enjoyed the latter).

This is not an unspoiled Thai paradise, so do not expect a Maya Bay-type affair (“The Beach”). If that is what you desire, I would suggest going elsewhere, even on Koh Phangan, but not Haad Rin.

Koh Phangan’s Full Moon Party is just that…… A world-famous PARTY, enticing a host of international DJ’s and hedonistic party-goers alike. Make your own decision and don’t just trust the reviews, go and give it a try – you only live once….

Review based on the 26th of February 2013 Full Moon Party.